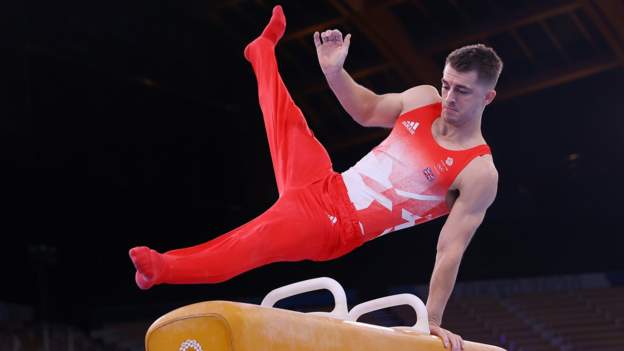 Whitlock was third after scoring 14.900 points, with the top eight making the 1 August final.

Ireland’s Rhys McClenaghan was joint leader in the pommel standings after a score of 15.266.

Britain also reached the team final, qualifying in fifth with a points tally of 256.594.

Whitlock had been cheered on from home by his two-year-old daughter Willow in a video posted on social media by his wife Leah, and admitted to being relieved after qualifying.

“I can say on behalf of every gymnast that qualification is the hardest and most nerve-racking thing ever, because everything rides on it,” said Whitlock.

Joe Fraser was Britain’s top all-around scoring gymnast, accumulating 86.298 across the apparatus to qualify in fifth place for the final where he will be joined by James Hall, who scored 84.431 for 12th.

Fraser will also be in the parallel bars final, with the 2019 world champion qualifying in sixth with15.400.