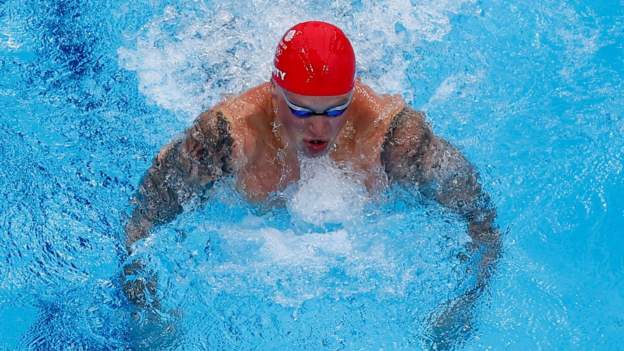 Adam Peaty remains on course to become the first British swimmer to retain an Olympic title as he breezed into the 100m breaststroke final.

The world record holder and Olympic champion, 26, finished fastest in the semi-final in Tokyo with a time of 57.63 seconds.

James Wilby also made it into the final by finishing third fastest in the first semi-final with a time of 59 seconds.

But there were no podiums for GB on the first day of medal races in the pool.

Max Litchfield came closest but narrowly missed out in the men’s 400m individual medley final for the second Olympics in a row.

He was a close fourth – the same position he finished in Rio – as USA’s Chase Kalisz won gold to take the first medal in the pool at Tokyo 2020.

Despite a strong showing in the heats, Aimee Willmott was unable to mark her final appearance at an Olympics with a medal in the women’s 400m individual medley.

The 28-year-old Commonwealth Games champion, who competed at the 2012 and 2016 Games, finished seventh as Yui Ohashi won Japan’s first medal in the pool.

Britain finished fifth in the women’s 4×100 freestyle relay as Australia won the gold medal with a world record time of 3:29.69.

In one of the early shocks of the Games, 18-year-old Ahmed Hafnaoui of Tunisia won men’s 400m freestyle gold.