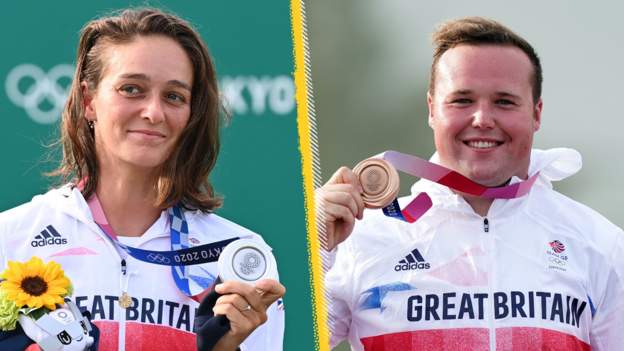 Moments earlier, world champion Coward-Holley finished third in the trap, shooting 33 of 40 in the final.

Overnight, rowers Helen Glover and Polly Swann missed out on a fairytale finish to their story as they finished fourth in the women’s pair.

It was fourth too for fellow British rowers Emily Craig and Imogen Grant as they fell shy of the medals by just 0.01sec in the lightweight women’s double sculls, while in the pool James Wilby placed sixth in the men’s 200m breaststroke final.

China held off a late surge by the USA to win the women’s 4x200m freestyle relay in a world-record time of seven minutes 40.33 seconds, beating the record held by Australia by 1:17.

Here’s what else has happened on day six:

The women’s C1 event was added to the Olympic programme for the first time for Tokyo, and after winning the test event in 2019 hopes were high for 27-year-old Franklin.

Ranked second in the world, she was in gold medal position until the very last run when Fox, a four-time C1 world champion, usurped her on the top of the podium, 3.64secs quicker, to become Australia’s first female Olympic canoeing champion.

The bronze medal was won by Germany’s Andrea Herzog.

Franklin becomes only the second British female to win a canoe slalom medal at the Olympics, after Helen Reeves’ K1 bronze in Athens in 2004.

“I’ve had a struggle in my finals so to put down a run like that, even with that touch, was amazing for me,” Franklin told BBC Sport.

“It was so stressful being sat up there on the start line, but I had a moment where I thought ‘I wouldn’t want to be anywhere else’ – it’s just really cool.”

Coward-Holley entered the Tokyo Olympics as the reigning world and European trap champion but his chances for Olympic gold slipped early on after missing three of his first 10 targets.

The 26-year-old, who previously played rugby before breaking his back, recovered with 14 successive hits to climb into medal contention.

But his 33 hits from 40 wasn’t enough to challenge for the title, his bronze medal confirmed before Czech pair Jiri Liptak and David Kostelecky entered a shoot-off to take gold and silver respectively.

“It’s my first Olympics so to come away with a medal, it’s phenomenal.”

Glover and Swann only teamed up in the women’s pair earlier this year, after double Olympic champion Glover came back to rowing following a break to have her three children and Swann returned having worked as a doctor during the Covid-19 pandemic.

They were crowned European champions in April but could not add another Olympic medal to their collection, finishing more than two seconds off bronze as New Zealand won gold.

“In Rio I said it was my last one. This time I’m saying ‘no, it’s definitely it’,” said Glover, 35. “Everyone around me keeps going ‘no, no, you’re going to do the single’, but I definitely don’t see myself coming back. It’s definitely not in the pipeline.”

Less than an hour later, it was an agonising result for Craig and Grant as the Netherlands edged out the British pair for the bronze.

Italy pipped France to gold with the four crews separated by just half a second.

So far Great Britain have won only one rowing medal – silver in the men’s quadruple sculls on Wednesday.

GB was the leading rowing nation at Beijing 2008, London 2012 and Rio 2016, claiming six, nine and five medals respectively at those Games.

Wilby misses out in pool

Commonwealth Games champion Wilby had finished second fastest in the 200m breaststroke semi-finals but faded in Thursday’s final as Stubblety-Cook set a new Olympic record of of 2:06.38 to win the race.

“The result is what it is. It is hard, the way I swim it has to be a perfect balancing act and if I am off ever so slightly it really pays off in a bad way.”

Britain’s Alys Thomas finished seventh in the 200m butterfly final but put in an impressive performance as she touched home in 2:07.90, knocking off more than second from her semi-final time.

Scott, who has won two medals so far in Tokyo, eased into the 200m individual medley final while Luke Greenbank qualified quickest for the 200m backstroke final.

Anna Hopkin is into the 100m freestyle final while Molly Renshaw and Abbie Wood both booked their places in the 200m breaststroke final by finishing third and fourth in their respective semi-finals.

American Dressel won his second gold of the Games and remains in contention for a further four meals as he looks to finish this Olympics as one of the most successful swimmers at an individual Games.

Only two swimmers in Olympic history have won more than six medals at a Games – Michael Phelps with eight in Beijing in 2008 and Mark Spitz with seven in Munich in 1972.