GB are fifth in the medal table after four silvers across sailing, cycling and boxing, plus a diving bronze.

American gymnast Simone Biles won a bronze having withdrawn from four other finals to protect her mental health.

“I was proud of myself just to go out there after what I’ve been through,” said the 24-year-old, who finished behind China’s Guan Chenchen and Tang Xijing

Warholm, 25, ran 45.94 seconds to smash his own mark and win a final described as “truly unbelievable” by former British hurdler Colin Jackson.

After already clinching 100m gold, she goes up against fellow Jamaican Shelly-Ann Fraser-Pryce, US sprinter Gabby Thomas – the fastest woman over 200m this year – and Shaunae Miller-Uibo of the Bahamas.

British trio Keely Hodgkinson, Jemma Reekie and Alex Bell will be on the start line together in the women’s 800m final (13:25).

Scott’s successful defence of the men’s Finn title was Britain’s 13th gold medal at Tokyo 2020, a tally bettered only by China, the United States, Japan and Australia.

But a 14th failed to materialise when British cyclists were beaten in the women’s team pursuit and men’s team sprint finals.

In the team pursuit final, Laura Kenny was prevented from becoming the first British woman to win gold at three Olympics – for now, at least, with chances to come later this week in the omnium and madison events – by an outstanding German performance.

Jason Kenny, Laura’s husband, equalled Sir Bradley Wiggins’ tally of eight medals when he won silver in the team sprint. Kenny has one more gold and silver than his fellow cyclist.

A dramatic day in the velodrome saw riders crash and records tumble, with Denmark and GB riders colliding in the men’s team pursuit. 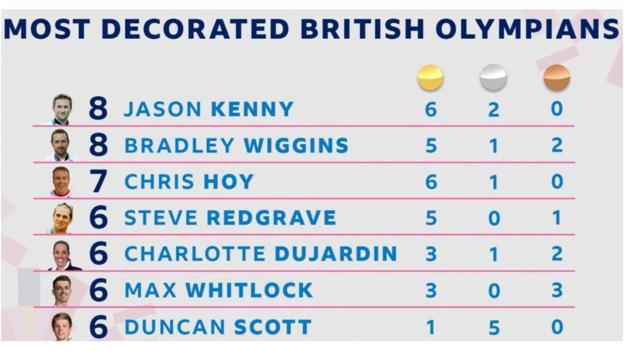 The cycling medals came after John Gimson and Anna Burnet earned Britain’s third sailing medal of the day with silver in the mixed Nacra 17, while diver Jack Laugher won bronze in the men’s 3m springboard.

Another silver followed at the boxing, where Pat McCormack was beaten in the men’s welterweight final by Cuba’s Roniel Iglesias.

A tearful Gemili said pulling up out of the blocks with a hamstring injury was “the worst feeling in the world”.

How the sailors started a medal rush for Team GB

With 26 gold medal events taking place on Tuesday there were several opportunities for Team GB to add to their tally, with the aim of closing in on their record-breaking numbers at Rio 2016.

Five years ago in Brazil, the nation won 67 medals, 27 of them being gold.

In Tokyo, Scott won GB’s 13th gold of the Games – less than an hour after Fletcher and Bithell had added the 12th.

Gimson and Burnet then added another medal to cap a great day on the waves for Britain at the Enoshima Yacht Harbour.

Going into the final race, the pair were guaranteed a podium finish on their Olympic debut and finished safely in fifth to stay in silver behind Italians Ruggero Tita and Caterina Banti.

Scott, 34, was already assured of a medal with a nine-point lead going into his final race, but had to rally after a poor start to cross the line in fourth – enough to keep Hungary’s Zsombor Berecz in silver.

Fletcher and Bithell ended the dominance of New Zealand’s Peter Burling and Blair Tuke in the men’s 49er, edging to a final-race victory over Germany by centimetres in a tense finish.

“It was an intense race but it’s mind-blowing to be sat here now being Olympic champions,” said Fletcher.

‘Worst feeling in the world’ – injured Gemili out of 200m

Gemili, 27, saw his hopes of a medal dashed after injuring his hamstring in the final block start of his warm-up before going out for the heats.

He had been aiming to improve on his fourth place at Rio 2016, where he missed out on bronze by three thousandths of a second.

“I felt my hamstring go. I’m in so much pain. I said I just wanted to go out there and try. You have to try,” said Gemili, who was fighting back the tears during his trackside interview.

“I can’t believe it happened. I felt I had a good chance. It’s the worst feeling in the world.”

Ed Clancy – the most successful team pursuit rider in Olympic history – withdrew from the remainder of Tokyo 2020 and announced his retirement because of a persistent back injury.

Canoeist Deborah Kerr, 23, missed out on a medal in her first Olympics, finishing eighth in the women’s kayak single 200m as New Zealand’s Lisa Carrington, 31, continued her dominance by winning a third consecutive gold.

Boxer Caroline Dubois, 20, narrowly lost on points to Thailand’s Sudaporn Seesondee in the women’s lightweight quarter-final, missing out on the guarantee of at least a bronze medal.

Joe Fraser was thought to be a medal threat in the parallel bars, but finished eighth in the final as the artistic gymnastics came to a close.