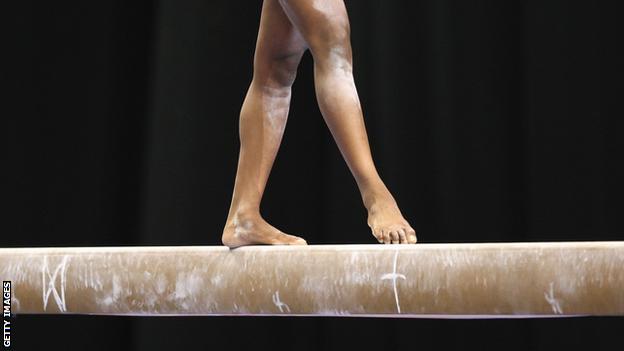 Warning: This article contains some description of graphic injuries and abuse.

A “damning” report detailing mistreatment of gymnasts in Britain shows that “child abuse” of athletes was taking place, says a former gymnast.

The Whyte Review said issues of physical and emotional abuse within gymnastics in Britain were “systemic”.

It heard from athletes who were made to train on broken bones, punished for needing the toilet, sat on by coaches, and subjected to excessive weight management.

“This isn’t tough coaching and slight mistreatment, this is child abuse of athletes at a very young age,” Nicole Pavier told BBC Sport.

“That has a monumental impact on the rest of our lives from a physical and mental perspective.”

The 306-page Whyte Review, led by Anne Whyte QC, and co-commissioned by UK Sport and Sport England at a cost of £3m, received more than 400 submissions of evidence.

Of those, more than 40% described physically abusive behaviour by coaches, more than 50% reported an element of emotional abuse, some 30 submissions included allegations of sexual abuse and more than 25% included reference to excessive weight management.

Pavier was one of the first gymnasts to speak to BBC Sport in 2020 about her experiences in the sport, and said in the two years since it had “put a lot of stress” onto the athletes who went public with their allegations.

“I think it is a good starting point and stepping stone into changing the culture of abuse that is in gymnastics at the minute,” she said.

“And Anne Whyte’s damning report into the sport will hopefully make [British Gymnastics] step up and create some positive changes.

“This is showing that it’s not just a few bad apples, which we had been led to believe, and actually by using our voices we now know that there is a culture of abuse and these are children being abused in clubs and there are a large amount of them.”

McIlveen is part of the Gymnasts For Change campaign group and said the report was “upsetting and shocking to read” but is “not news” to the group.

“It’s definitely very validating to see on paper what we’ve been saying all along and for gymnasts to see experiences that mirror their own – knowing that they’re not alone has been a really important part of the change movement,” she told BBC Sport.

She added she was “encouraged” by the review’s recommendations and by the words of British Gymnastics new chief executive Sarah Powell, calling it a “watershed moment”.

However, Gymnasts For Change said the report’s recommendations – which focus on safeguarding and welfare, complaints handling, standards and educations, and governance and oversight – “fall far short of what is needed”.

In a statement, it said: “Every day without holistic and wholesale change, another gymnast is put at risk and these recommendations fall far short of the change needed.

“We are calling for maximum limits on child athlete training hours and new government legislation on child abuse.”

In 2020, Olympians Becky and Ellie Downie said they had previously been afraid to speak out about their experiences of mistreatment, saying abusive behaviour in gymnastics training became “ingrained” and “completely normalised”.

Writing on Twitter on Thursday, Becky Downie said the Review’s release marked “an important day” for the future of the sport.

“A lot still needs to be worked on but I can confidently say some very big changes have already been implemented,” she said.

If you have been affected by issues raised in this article, there is information and support available on BBC Action Line.

We use cookies on our website to give you the most relevant experience by remembering your preferences and repeat visits. By clicking “Accept”, you consent to the use of ALL the cookies.
Do not sell my personal information.
Cookie settingsACCEPT
Manage consents